The weight of Mommyhood

I'm having THAT kind of mommy week.  So many obligations - not enough time. Even though I do my best to not overcommit myself it happens anyway.  Great things are happening (new job and promotion, craft business taking off, girls in a new school year) and right, wrong, or  indifferent I am spread thin.

I had a working lunch with a good friend who just gets my life, and after I showed her a few pictures of a new wreath she asked, "How do you fit it all in?"

Outwardly I brushed it off but inside I was thinking:
This isn't interesting or even unique to me. But, it sucks.

Tonight, Samantha had her very first soccer game.  Now, while we've gone through almost every sport with her sister, Samantha hasn't been involved in many activities.  There are a lot of reasons why, but mainly it's hard to go out and assert yourself when you spend every minute trying to climb back into the womb.

Samantha (oh yeah, she's Samantha again now that school started, not Sam) finally moved more than four feet from me and joined her first organized team. Now, Addi hated soccer so much we had to threaten to sign her up the following year if she didn't put forth a tiny bit of effort, so we wondered if Samantha would do the same.

Nope!  After practice one she came home exclaiming, "Addi! You were WRONG!  Soccer is FUN!"
After three practices and her first game, she's still loving it.  And bonus:  her team won tonight.

Having two cats is a pretty awesome.  They are fairly self sufficient, you can leave them for a few days at a time and they are alive when you come home, and never once have I come home to a missing wall (photo evidence here) and a guilty looking cat.  Aside from the litter and the furballs, they are pretty easy pets.

A bonus: Our cats love each other.  Even though Bandit (the white one) is older (like 12 maybe?) and Leo is the new young bribe kitten, they can be found spooning or bathing each other a lot.  There isn't a lot of hissing and the change from one to two cats was way, way easier than we expected.
Well, the last few days I realized I am so, so tired.  I thought maybe it was work, or maybe too much caffeine, but then, it hit me.

It was Bandit's rubber mouse.  This realistic, rubbery mouse that he loves so much that he must apparently play with it all hours of the day.  His absolute favorite is fetch (adorable evidence here) and I've been been forced many, MANY times by him nudging my hand to throw the mouse.
However, it's getting out of hand.  Not only does he now yowl at Leo if he comes near the mouse, but he brings the mouse to me in the middle of the night and drops it on my face.  Then, he tries to bury it under me in order to hide it from Leo, then yowls some more when Leo tries to cuddle.

Getting ready for school

Even though our kids go to Catholic school, at the end of the day they have many of the same perks and trials of any other school.  And just like every other school, we have standardized testing.  Last year it seemed like the entire first month of school was taken up with testing, so when our school decided to try out having the kids do their tests three weeks before school started this year, I was intrigued.

Today the girls had their math tests, so I picked them up from summer camp and dropped them off.  Addi was done after about 45 minutes so she joined me in the conference room where I was working while we waited for Samantha to finish up.

Addi decided to do a little impromptu testing of her own.  It was called ,"Make Mommy guess from across the room what animal I just drew on Sally Jessie Raphael her girl's shirt." I passed my test, by the way.

We went to a local pizza place for dinner one night last week, and as is typical during every outing the girls had to go to the restroom.  We let them go together and when they came back we headed to the car.

We were in the parking lot when Samantha said, “Hey, look at my new belt!” 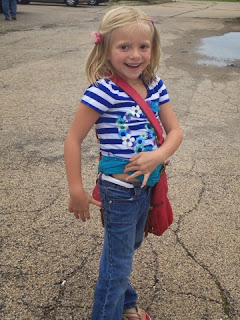 A belt, made out of toilet paper.  Apparently she couldn’t work the button on her pants, so weaving TP in and out of multiple loops was easier. 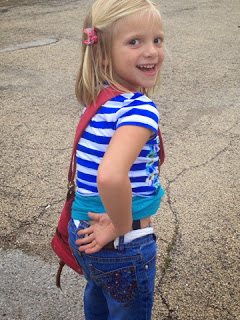 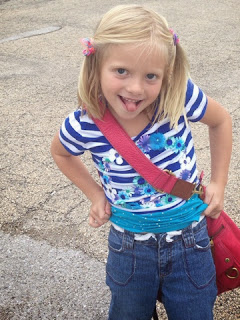 I'm not the most creative person in the world, but I like to throw random things out into the world every now and then to try and trip the kids up.  Like when they ask me to tell them a story and I throw in magical talking horses, backyards with bouncy grass, and secret basements filled with candy. I guess I really shouldn't be surprised by the things that come back out of their mouths considering I'm their mom.

Somehow though, I am surprised almost daily.