What God does for you - a la Addison

Addi: Look at my big belly. I am so fat.

Me: Addi, you are NOT fat. Yes, your belly is nice and round because you are growing.

Addi: But look! I have all these wrinkles in it! [squishes her belly all up]

Me: You should never say you are fat. Mommy's belly is big but I don't say I am fat because I think it hurts God's feelings. He makes us just like he wants us.

I'm glad her Catholic education is doing some good.

When my dad moved to Illinois he brought his Austrailian Cattle Dog Rowdy and moved to a 17 acre farm in the country.  After a few months, he basically adopted our dog Sugar, since she loves spending her days on the farm versus at our home, alone, all day long.  And we love it because Sugar is happy, Rowdy has a friend, and we clean up pee a whole lot less.

A few weeks ago, I worked from the University of Iowa Hospital while my dad had his SUPER SUCCESSFUL, BETTER THAN WE COULD HAVE HOPED SURGERY!! while our neice Miranda watched the kids and my dad's dogs.  Because of my limited wireless and limited ability to concentrate, I worked on cleaning files and emails out that I don't need anymore.

And I came across a picture of a more somber time in our lives, one where we were dealing with trying not to kill training Sugar. As a reminder, here's the story on how Sugar came to live with us.  Take a second to read it.  I'll wait.

OK.  Remember how I posted that I came home to a missing wall?  Well, many, many people, my husband included, reacted the same way when I told them our dog ate our wall.  They said, "Realllly?  Did she EAT the wall or just scratch it?" then stared at me while I pounded my head into the newly exposed support beams in my kitchen.

Here is the picture I found. 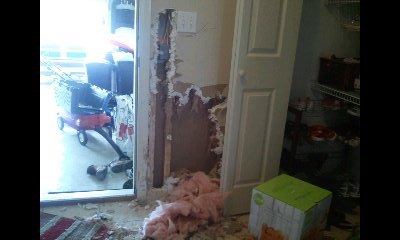 It's been 20 days since my dad went in for his surgery, and the results have been nothing short of a miracle. Here's a recap of that day and the ones since, in case you haven't been lucky enough to be at the Ralph house this month.

After spending the night in Iowa, Dad got dressed for his surgery, then showed me what he thought of cancer. 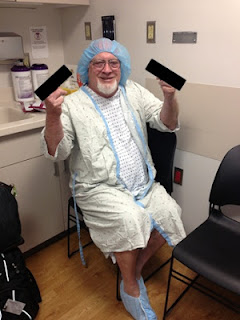 Then we took a picture that the kids could actually see, and hugged and kissed him goodbye.  This part sucked.  And not just because my Dad in a dress is kind of creepy. 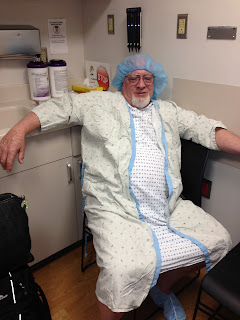 Next we took over the waiting room.  Jay and I both worked remotely from the hospital, Lee worked on napping, and we took breaks when we needed to relax.

About 6 hours into the 8 hour surgery, we got some promising news from a nurse - they did not have to remove his bladder.  We knew that was the BEST case (ie: next to impossible) scenario, so we were cautiously optimistic for the final report from the doctor.  After his heart attack and hearing good news, then not great news, we didn't want to get too excited.

About 2 p.m. the doctor came down to fill us in on the details.  Walking into that room was beyond scary, but totally worth the wait.  Dr. O'Donnell told us that the cancer was isolated to his urethra and 4 of the 10 lymph nodes in his groin, and they were able to keep his prostate, bladder and part of his urethra.  He had three incisions to heal and a lot of recovery time left, but compared to what we planned for this was beyond amazing.  We totally made the right call in going to Iowa for a specialist, and somehow, someway Gene was given a second third fourth lease on life.

I was in the waiting room when I saw a familiar face rolling by, so I ran into the hall in time to see my Dad heading to his room.  They slowed down, he yelled, "I still have Mr. Winky!" and they kept going.  That gave me a full 10 minutes to explain to the other people in the waiting room what the heck Geno was talking about. The fun didn't stop there, no sirree... Once he was in his room, dad started drunk drug dialing people and talked to them like any old person would... By screaming into his phone.  And if there's one thing to know about Gene, it's that he has a filthy mouth.  Oops.  My apologies to the third floor staff.

Five days later, Dad was able to come home to my house to finish his recovery.  The nurses appeared to be sad to see him go, as he was well known by day four as the one who says, "Thanks for playing with my bulbs" to any nurse that emptied his drains.  His dog was beyond happy to see him come home, and we settled in for a month long recovery at Casa de Ralph.

A few days later, Dad got an infection and headed back to the hospital for six days, but he's again back home with us and working on recovery.  Because they removed lymph nodes he has to worry about swelling in his legs and he has to wear thigh-high compression stockings.  Jay took him to get fitted for those and apparently neither of them noticed the ones they bought have lace across the top. That's my dad - a lady of the night. Putting them on was an experience all it's own, complete with cursing, sweating, and laughing.  And the finished product? He looks like a Vietnam Vet version of Mrs. Doubtfire.

By the grace of God, we will have what we hope is many more years with my dad. He's one of a kind, that's for sure.

Fish are pretty great pets. Low maintenance, low expense, and I haven't come home once to a missing wall with a sheepish looking guppy to blame.

I did, however, have my first "damn you fish!" moment tonight.

One minute after I dropped the entire container of fish food on the floor.

Three minutes later the mess was gone, like it never even happened. And I was reminded again why they are the perfect pets. 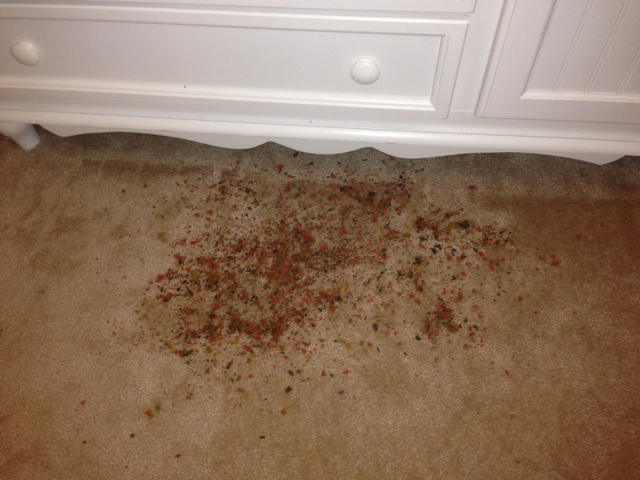 I need a nap

Some days it is very clear to me why I am so tired. Tired,with a strong need to visit the chiropractor. 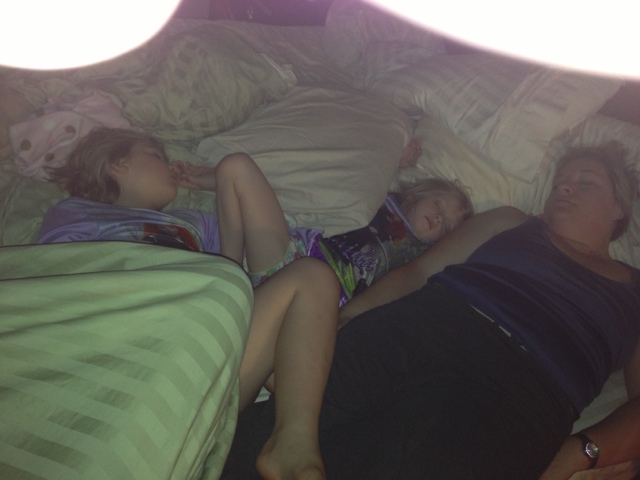