Last Monday as I headed in to put Samantha to bed, Jay asked me to talk to her about her homework.  When they were working on it after school, she was being really evasive anytime he asked her questions about it and he thought it was kind of fishy.


I asked her some basic questions and she kept saying, “I’m not talking about my homework, and I already told Daddy that.”  When I pushed, she told me it was a secret and she didn’t want to get in trouble, so then I started to get a little worried.  I looked her straight in the eye and told her that no matter what she said, she wouldn’t be in trouble and that secrets aren’t good and even though I could tell she heard me, she still wasn’t going to spill.
Finally I put a pillow up in between us like a wall, stuck my hand up like a puppet, and in a squeaky voice said, “Hey Sami! Can you tell me your secret?”
Two seconds later her hand appeared over the pillow and I heard, “I copied all of my homework off of Joseph.”
Extremely relieved that it wasn’t something BAD, we had a heart to heart about cheating and how if she doesn’t understand her work she should tell the teacher instead of copying, because she needs to learn this.  After a few minutes I said, “Have you copied off of Joseph before?” and she replied, “No, NEVER!”
[pause]
“I usually copy off of Julie.”


We just got her progress report and I have send Julie’s parents a thank you note for raising such a smart child.  Sam’s getting straight A’s.

Math is bad for your health

With the new school year, stress of a new job, and just life in general, sleep has been hard to come by for me.  Most nights I put a kid to bed, fall asleep in their room, and if I am lucky wake up before 10 p.m. and head downstairs to hang out with Jay, watch TV, craft, work, or whatever.

Then I start watching ridiculous shows on TLC like "I'm pregnant and so is my daughter" and before I know it, it's 1 a.m. and I'm wide awake.

The obvious answer to that issue is to not watch TV, so over the last few weeks I've made an effort to go lay in bed at bedtime, even if I don't think I'm tired.  I assumed my "insomnia" was self induced vs. real and if I just relaxed I'd go right to sleep.

There's a LOT of noises that happen in a house at night when you are trying to sleep.  Is it the cat hiding his mouse from the other cat, or a burglar coming in to kill me?  Is it a kid coughing, or a kid about to barf?  Did I lock the windows?  Is the garage shut?  I know better than to wake Jay up for most of those, so usually I just lay there and try to drown out the sounds coming from the house.

There's one issue.  The sound keeping me up last week was my own heart beat, and shutting that off was kind of hard. It was SO LOUD... Like pounding out of my chest... And no matter how I rested, I couldn't get it to quiet down.  Finally I sat up, grabbed the iPad, and Googled "pounding heartbeat."

It suggested I take my resting heart rate, so I did.  I set the stopwatch on the iPad, located my heartbeat, and 20 seconds later did the calculations to see my heart rate was.... 130?

That seemed pretty high, considering I was laying down and not jogging in place, so I took it again.  135 this time, which I guessed was due to panic.  And the panic was easy to come by, because according to Google, "A healthy adult heart beats 60 to 100 times per minute when at rest. Anything over 100 beats per minute consistently is considered as having a high heart rate (tachycardia).  Tachycardia can seriously disrupt normal heart function, increase the risk of stroke, or cause sudden cardiac arrest or death."

Um... so not only was I missing the season finale of Hoarders, but I was going to die?

I tried to relax and slow my breathing, which seemed harder because my heart didn't feel that fast to begin with.  Finally after debating whether I should wake Jay up to tell him I was going to die or just drive myself to the nearest fire station, I was able to fall asleep.

I decided to take it one more time before panicking Jay.  I set the stop watch for 20 seconds, counted how many times my heart beat, then multiplied by 5, just like I had each time before.

Then I realized that 20 times 5 is 100, which is NOT the number of seconds in a minute.  Once I multiplied 23 by THREE, I ended up with a much more reasonable, non-life-threatening number.

And this is why I don't do math for a living.

You know how when you go camping and it takes a day or two to get the campfire / tent / fish smell off of you?  You shower, wash your clothes, and still when you get in your car there is a lingering something special?

That is how life is with Samantha and summer camp.  We are needing to wash the rest of the bad attitude and sassiness right out of that girl's hair.  Most of the summer things were fine, but the last few weeks we started noticing a little different stench exuding out of her.

A little more attitude
a little more back talk
a "shut up" here and a white lie there
just a little too big for her britches.

Now, do I blame daycare?  Nope. They were awesome.  But, she spent a lot of time with older kids (including her sister), she had basically no bedtime and we really didn't keep them on a schedule.  It's just part of the glamour of being a working family - it takes a village to keep them out of prison and sometimes it's not all rainbows.

The sassiness and the attitude I could deal with (Addi has given us loads of practice there) but I did start to get a little more concerned about the lying.  None of it has been over anything big, but little lies popping up here and there.  She "can't remember" who filled a cup up with water and grass and left it on the table... She doesn't remember how she got sunblock all over Jay's new truck (after embellishing his old one with a rock down the side)...  She apparently lost her memory as well as her mind this summer.

I am hoping we have caught this early and with some stiff punishments we can hold off on juvie for a while.  But, I do think from now on when I catch her in a lie I'll sing to her this song I just made up (to the tune of "Girl on Fire" by Alicia Keyes).  Not only will I have ruined her favorite song but she'll have to listen to me sing off key.  KILLER.

She's just a girl with pants on fire
Sent to her room, lonely like a highway
She's a liar, liar pants on fire
Blaming her sister for everything, but she knows she can't get away

The dogs are barking

I'm home doing what I do every other Wednesday evening - cleaning up for the cleaning lady to come tomorrow.  I'm more picking up - not cleaning anything - just putting things where they belong so Mary can do her thang, and so we can actually find stuff when she leaves. She's amazing at cleaning and apparently even better at putting things away SO WELL we can't find them for weeks.

I realized I do something I GUARENTEE doesn't happen when Jay picks up. I see a row of very carefully placed toilet paper squares all around Sam's room, and instead of tossing them in the trash I evaluate the level of anger that will arise from said child when she sees I've destroyed her "very special thing."

Here are my levels:

5 - 8 = high pitch screeches that make the neighbor dogs bark and usually result in yelling, sobbing, and "you just don't understand".

I'll let you know what happens next. Fingers crossed I can blame it on the cat.

Today was the first day of week three for the girls' 1st and 3rd grade years, so there's no better time to show off their first day pictures! 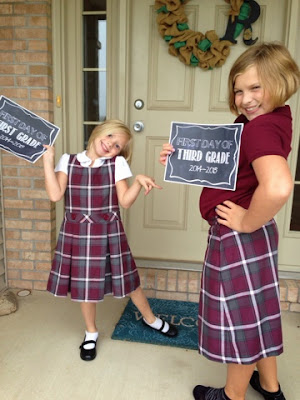 Tonight Addi's friend was texting her on my iPhone.  If you have an iPhone and are texting someone else on an iAnything, when they are typing you see a .... until they hit send, and this was the first time Addi had seen this.

She said, "The waiting is killing me!  I wish she'd hit send!  The anticipation is overwhelming!"

It was cute.  It was fun to watch.  And it made me see that when she asks me for her first phone, I am TOTALLY saying no.