Some people are surprised that we have a cat.  Not because we aren't pet people - we are, despite our terrible luck with them - but because they never see him.  Oh, and because we never talk about him.  Basically it's my cat, and Jay only agreed to getting him because he thought our dog at the time would﻿ eat said cat and he'd never have to hear about it again. 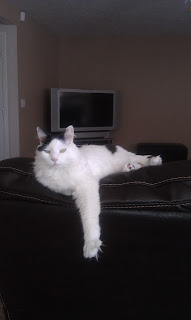 The cat pretty much hates everyone but me.  He's starting to warm up to the kids but that's after years of Addi trapping him in her room so she can "pet" him.  Maybe "warm up" isn't quite the right term.  "Give up" might be better. Bandit pretty much stays to himself unless I'm around.  He lets me pet him, brush him, feed him, and is in my face from the minute I wake up until I leave for work.  Since Jay leaves a lot earlier than I do﻿, he never sees him.

I'll take that back.  Jay USED to leave a lot earlier than me.  Recently he started going into the office a tad later, so the cat started coming out of hiding while Jay was still there.  And Jay was shocked to see the cat rubbing his cute white face all over Jay's toothbrush.  He freaked out and I said, "Oh that? He does that every day."

I can tell you that was not a pleasant morning in our house, when Jay realized Bandit had more than one friend in the house.  He was totally grossed out.  Not grossed out to move his toothbrush, so I don't see what I did as entirely wrong. :)  Isn't he a lucky guy?

Anywoo, on to the name of the post... I finally (after three years) took the cat to the vet.  Good bill of health and the vet was very impressed with how clean his teeth were.  I proudly told him he brushes at least once a day, with an Oral B Electric.  Take my cat to the vet - Done!

During Addi's second to last soccer game, she proved once again that soccer "ain't her thang."  So on the way home, we asked her what other sports she might like to try.

She said, "I think I should play volleyball.  You know, because I love wearing a bikini."

Shockingly enough, Jay is a big fan of beach volleyball.

You can’t spell Addison without “ADD"

Addi has always been strong-willed.  And opinionated.  She’s physically capable of picking kids up and hoisting them up to look over a 6 foot privacy fence.  And during kindergarten, her teacher suggested and her pediatrician confirmed that she also has signs of ADD.

Now, she doesn’t have the hyper-ness that other kids have, more like she won’t focus on what she needs to do.  Jay and I (and her doctor) have had reservations with putting a label on her because a good chunk of the time, as soon as she decides to do something, it’s done within 3 minutes.  It’s the desire to DECIDE to do it that she lacks at times.  No medicines were prescribed and so far (fingers crossed) first grade is a whole new world, filled with complete homework and glowing reports of participation in class.  Here’s hoping she has outgrown some of the “ADD tendencies” we saw in kindergarten.

Now, one place she has not outgrown her ADD is with sports.  In an attempt to channel some of her “extra” energy and impressive strength, we’ve encouraged her to find a sport she loves and really wants to excel at and work hard at it.  Here’s where we are today:

Sport/Activity:  Dance (Tap and ballet):
She did this for a full year and cried every other class that she didn’t want to go.  According to me, we loved it because I got to hang out with my friends and Addi looked cute.  According to Addi, she hates practicing.  According to our bank account, recitals and costumes are way too expensive for someone who doesn’t love it.
Status:  Terminated

Sport/Activity:  Swimming:
It may come as a shock to some of you, but Jay was actually a great swimmer (I’m talking college scholarship good) back in the day.  According to Jay, Addi has great form and a lot of potential.  According to Addi, she doesn’t like her face getting wet.  And according to us all, after one unfortunate incident in the men’s locker room and her accidentally getting an eyeful of a you-know-what, she’s old enough to use the women’s locker room unsupervised.
Status: To be continued at a later date

Sport/Activity:  Running
Last week Addi signed up for the running club at school.  Everyday during recess, the club runs laps in the parking lot, earning a reward after so many laps.  According to Jay and I, the running club is a great way to get rid of extra energy at school.  According to Addi (as of this morning), she’s quitting because, “I thought we’d just play some games but guess what? We have to RUN!”
Status: Terminated

Sport/Activity:  Soccer
Jay and Addi both signed up for soccer this year, with Jay as coach.  She was thrilled to pick out soccer cleats and was excited to see who was on her team.  According to me, Addi has enough athleticism to do well, but she seems more interested in doing handstands on the sidelines.  According to Addi, she hates it and doesn’t try during her games because, “we are winning by 4 points, my team doesn’t need me to try harder.”  And according to Jay, unless she tries hard the rest of the season, he will force her to sign up next year too.
Status: Ongoing (with fingers crossed she tries hard)

Sport/Activity:  Golf
During our garage sale my dad bought a set of child golf clubs, hoping Addi could play with her dad.  According to Addi, she loves miniature golf and thinks golf sounds fun.  According to me, golf is a great place to socialize so I’m all for it.  And according to Jay, she’s got one heck of a backswing – while practicing in the backyard she nailed him right in the jaw, causing him to see stars and need an ice pack.
Status:  Maybe (pending Jay’s x-rays)

Sport/Activity: Gymnastics
I loved gymnastics as a kid and given Addi’s flair for the dramatic, we thought she’d like it.  And she does.  She’s constantly doing handstands, back bends, and flipping all over the house.  According to Jay, it’s not a long term sport because she’s going to be around 5’10” and really, no gymnast is that tall.  According to me, I think its fun, cute, and I think she can succeed.  And according to Addi, she’s only interested in going to class if she has a certain cute boy as her instructor – otherwise she’s not interested.
Status: Maybe (pending cute boy status)

Maybe she suffers from the same ADD I have for crafting.