Sisters are the greatest, at least that's what I tell my kids. I remind them when they are arguing or annoyed with each other that 1. it's normal to feel like that and 2. that they are so SO lucky to have each other. I tell them how I always wanted a sister and was lucky enough to marry into six sister-in-laws, but nothing beats that built in best friend.
(I also tell them that while I was happy to have a brother, he just didn't look as good in dresses. Mom, do you still have that picture of him dressed up as a Girl Scout Brownie??)
I saw this on Facebook and had to laugh because even though they are eight and almost six, they still pick out clothes that look like each others and sometimes want to be coordinated.  They definitely don't want to be matchy matchy all the time, but it's still fun to do every now and then.  I also said a silent "thank you" that those disgruntled looks are few and far between and patted myself on the back for raising well-adjusted sisters.
This morning, Addi wanted to take some pictures with Leo.  I'll admit, he's a pretty great muse - just look at how cute he was last night!
I took the pictures, got the kids off to school, and headed to work.  I was flipping through my phone at lunch and saw the pictures, and as I zoomed in I realized, maybe they aren't quite so well-adjusted.


Sam left Addi's room a bit miffed that she didn't get a solo selfie with Leo, so she yelled for me to come take a picture of her and Bandit.  I happily cooperated. 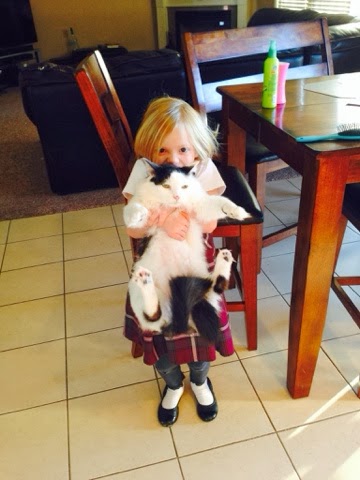 Bandit kind of has the same look as Addi did in her pictures, don't you think?  At least HE can't slam doors.
﻿﻿