She's got it down

I'm fairly sarcastic and quick witted, so it doesn't surprise me that my first born would be just like me. Sometimes it's her repeating what I've said and asking (with a sad face) what it means and sometimes it's her coming back instantly with a zinger that I would have said but is disrespectful when coming from a seven year old.  They can be cute, they can be inappropriate, and sometimes, they are downright hilarious.

For prosperity's sake, I'll give you a few examples.  But be warned - you might be next.

When Addi was born she was 9 lbs 4 oz, so when she went to the nursery she got a lot of stares.  Apparently, she has heard me telling her birth stories because a few weeks ago she said, "Mommy, when I was born why did I look like I are the other babies?"

At her last haircut Addi asked for a pretty short 'do.  After Ryan finished up, Addi looked in the mirror and said, "Uh oh... I think it's too short." After Ryan looked at her with really large eyes, she said, "Eh, we can work with it."

One night when packing up for swim team, Addi was screaming and running around like a drunk monkey. I said, "Addi, calm down. You are being annoying."  She turned and said, "Oh really? I can be MORE annoying."

And finally, last night we had been home for about two hours when I heard a thud, scream, and then cry coming from the basement. I ran down there to find Sam laying on the ground, crying, with a large box on top of her. I looked at Addi and she said, "I just lost my mind for a minute."

We are definitely in trouble. 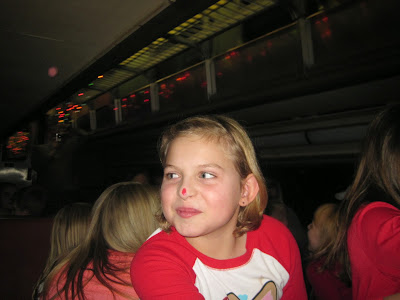