Getting my craft on (and it was Jay approved!)

My poor husband deals with my crafting ADD about as well as I could expect him to. He grumbles when he trips over random materials, he makes fun of some of my projects, but mostly he just rolls his eyes.  I think if I had ONE craft I was really into he would be more supportive but I change up what I'm working on almost every week.

Case in point: Saturday I crocheted half of a scarf, then got bored, and last night I made four rubber band bracelets, then got tired. Tonight, who knows!

Well, remember the wreath I was so proud of a few years ago, that Jay decided looked like toilet paper?  Well, I had some left over materials so one night while Jay watched football across the street, I got out my coffee filters and paint and by the end of the evening my kitchen looked like this.
﻿
After they all dried, I checked in with my doctor Google and found how to make flowers.  Then I got to work and spent the next few weeks making these. 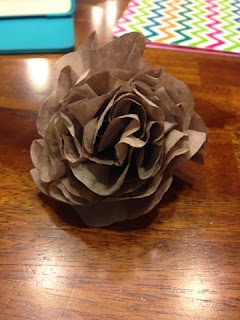 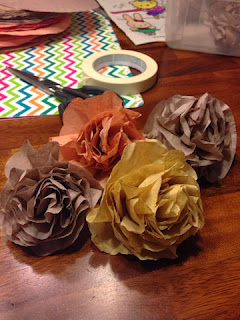 ﻿
A few weeks later I completed the project.  And if I do say so myself, it turned out WAY better than I thought.  Jay even gave me a huge compliment: "Wow! That looks so much better than the one that looks like a giant tampon!"

I also threw this wreath together - I bought the materials two years ago during my "wreath" faze and got bored.
Two wreaths, several hours, and one 2nd degree burn. Not bad for someone with crafting ADD.