I like to think I'm a fairly honest person - In fact, I think most of the time I'm a little too honest.  Mostly I want to be a good person, but part of the reason is simple.  I suck at lying.

This year my mom turned 60, and when my uncle called to suggest a surprise party I had a lot of doubts. Now the doubts most likely stemmed from Phil saying, "Your mom already told me she does NOT want a party in any way shape or form, but I know she'll like it once it happens. So let's get planning."  But somehow I let him talk me into it, and within a few days this invitation went out to 70 of my mom's closest friends. 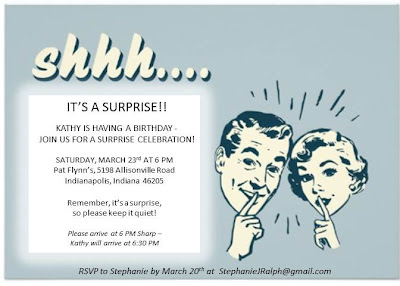 I did feel bad about planning the party for her since she said she didn't want one.  But when she called and said, "I know Phil is planning a party for him and I told him I do NOT want one.  I am mad!" I did what any girl who prefers honesty would.  I lied through my teeth.  I said, "Mom, if he is planning one I sure haven't heard anything.  And I'll be upset if he plans one and doesn't tell me!"
She believed me.  I felt guilty.  But since my brother Lee and family had already purchased their plane tickets, I got over myself.  And somehow the 70+ people managed to keep it a secret and Jay and the kids and I headed to Indy to pick Lee and kids up from the airport.
My mom knew the kids and Jay and I were coming for a visit and expected us around 3, so we drove to her neighborhood and had the four kids ring the doorbell.  Click here to watch the video.  It's awesome!
Friday the girls swam at the hotel we were staying at and hung out with their cousins.  Saturday we had our nails done, then all went and had family pictures taken by Annie Syers.  The few shots we've seen so far have been great!  Then we headed to a "dinner" with a few friends which was really, in fact, the surprise party.   I don't know how it happened but my mom was STILL surprised!  We had a great time with 60+ friends and family.
On Sunday we headed home to Illinois, where a freak snowstorm hit.  The drive wasn't fun but Lorelai and Sabrina got to play in the snow, which Lorelai had never done!
All in all, a pretty great weekend!
﻿

So glad this all turned out so nice! You're a good daughter :)