After years of assorted fairies visiting our house (paci fairies, potty fairies, leprechauns...) you would think that something as boring as an ordinary tooth fairy wouldn't be exciting to young Addison.  However, after months and months of watching her friends loose teeth and her having two wiggly teeth that hung on for over two months, the Ralph house welcomed the head honcho of all fairies, the TOOTH FAIRY, to our home.

Addi was easily convinced to leave her tooth in her windowsill in a toy, making it much easier for the TF to head in and out.  And the next morning, both $1 and fairy dust were there instead. 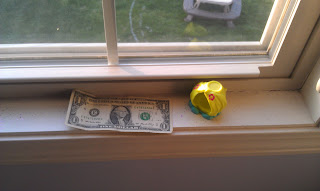 A few minutes later I saw Addi running up and down the hall before sitting down, depressed.  Apparently rubbing "fairy dust" (aka glitter) on her arms didn't give her the ability to fly like she'd hoped. 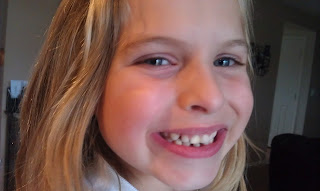