The one where Mommy turns into a feminist

If I had to pick one word to describe me, it would be wishy-washy. Is that one word? I'm not really sure, but I could say yes now and ask me tomorrow, I'll say no. Maybe wishy-washy isn't the right term, but for things like politics... I'm a flip flopper.

So when it comes to things like the glass ceiling, or women's rights, or even dress codes, I've never had a strong opinion either way. If I talk to a full-on feminist for a few minutes I'll be shaking my fist in a rage about the injustices bestowed on us all. Five minutes later I'll try to channel the 1950s, with the feminist movement a distant memory and me in the kitchen, being all domestic.

OK, OK... that part never happens. I so never cook.

Somehow, despite my wishy-washyness, somehow over the last two years I've slowly become really good friends with a full blown feminist. Someone who reads books on women's rights and says "girl power" and thinks of things like taking the girls to a fire station, but only if there is a woman firefighter there to show the girls a strong, independent authority figure. Things that pre-friendship would only happen on accident, not because of some planning on my part.

So try to imagine the SHOCK I felt when I had my first, full on feminist thought.

It all started with some deep cleaning of the girls' rooms. Basically I pulled every. single. toy. out of their rooms, then stared in amazement. Because somehow all of this fit into two bedrooms. 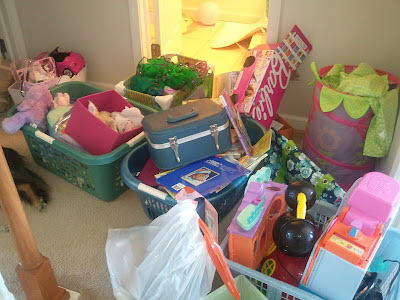 After the shock wore off I spent several hours sorting the toys. Pet Shops in one box, Zhu Zhu pets in another. You get the idea. I even started dressing the Barbies, and that's when my feminist revolution began.

Because Barbie? She's kind of a slut. I mean, seriously, we have at least three Barbies who are only wearing swim suits, many without a top in sight. One Barbie appeared to be heading to the Playboy mansion for some sort of pajama party, and don't even get me started on the boob-to-waist ratios. No wonder girls have a negative self image by the age of 8 if they aren't blond! Chant with me! Girl Power! 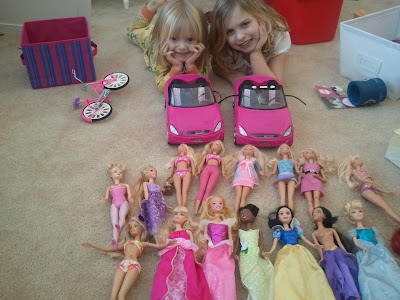 OK, so there is a slight chance my anger was based on the fact that Barbie has yet to sport the muffin top I'm trying so hard to bring into fashion. Or that she drives a better car than me.

I choose to believe it's because I'm now a feminist. And my friend Beth agrees with me.