A few months ago, we were sitting on the couch - the couch we bought right after we got married and loved to pieces... literally - then got up.  And Jay said, wow, my back hurts.  The next day, more of the same.  After a few weeks of this we faced the cold, hard truth.  We needed a new couch.

We started talking about what kind of couch we wanted, and looked down.  And took in a good long look at our stained carpet.  So we added new carpet to the To Do list.

Then Jay said, "If we are getting new carpet, I'd rather go ahead and paint the living now.  You know, before the new carpet goes in.  So we might as well paint the kitchen too while we are at it."

Score!  I've been dying to paint the kitchen for years.  And Jay's pretty much wanted to do anything but.

While were were at Lowes checking out carpet, Jay said, "If we are going to paint the kitchen, we might as well put in a tile back splash, don't you think?"

Did I even need to answer?  Of course I want a backsplash!

So, one December day we headed, sans Addi, to pick out tile.  Turns out that's pretty much an impossible task that takes a really long time.  So Sam found something to keep herself occupied while she waited. 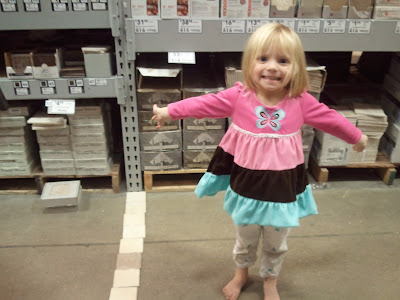 Adorable, dirty feet and all. 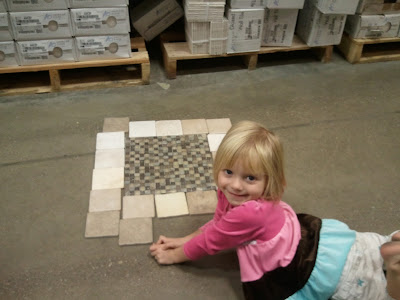