One of the biggest regrets, sadnesses, disappointments, whatever you want to call it, is that our girls never got to meet Jay’s mom Janet.  When I try to explain to people who she was, I feel like there’s no way for me to do it justice.  She wasn’t my mom, just someone I had the honor of knowing for a few years before she died, but she was by far the nicest, BEST person I ever met.  She was one of those people that don’t really exist but in dreams – someone who is always supportive, nice to everyone, close with God, positive at all times, and just all around great.  And aside from her taking the things I said totally literally (not good for someone who’s 99% sarcastic), I think she enjoyed my company as well.  At least I hope she did.

Janet died when I was pregnant with Addison, and during her funeral Jay’s aunt Kathy spoke about all the family left behind, specifically the grand kids. Then she asked Janet to kiss the unborn babies (Kelly and I were both pregnant).  When Addi was born with two birthmarks on her eyes, the doctor informed us they are called “Angel Kisses” and we weren’t surprised at all.  We know her grandma in heaven loves her and is her guardian angel.

We gave Addison the middle name of “Marie” – both Janet and my mom’s middle names – and have talked to her about Janet for her entire life.  She recognizes her in pictures, likes to hear stories about her, and loves putting her special Grandma ornament on the tree every year, a gift from Aunt Jill to all the grand kids with flowers inside it from the funeral.  So, it wasn’t surprising, or scary, or shocking when we saw the sentence she chose to write for a homework assignment.  It was just awesome. 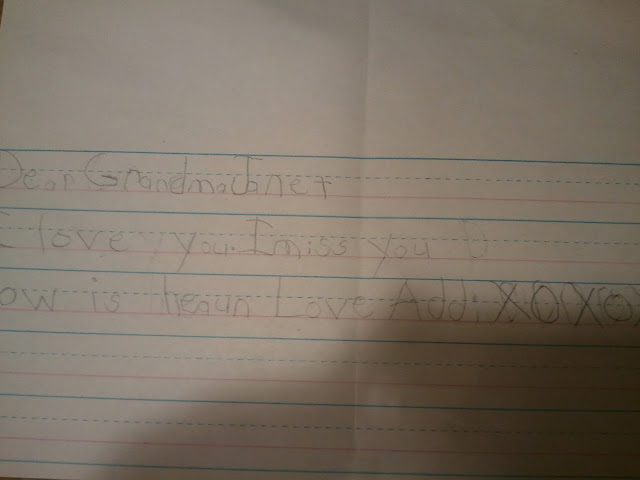 For those of you who can’t read her left-handedness, it says,
“Dear Grandma Janet,
I love you. I miss you.  How is heaven.
Love, Addi XOXOXO”

I am just catching up on your blog for the first time in forever, that is so sweet. Addi has a heart of gold!