We Ralphs aren't exactly the luckiest bunch.  Not unlucky, per say, but strange things tend to happen to us.  Exhibit A:  Jay isn't allowed to donate blood because his grandpa may have died from a mad cow disease-type thing.  Strange.
Exhibit B: My father in law, after years of pain and suffering, finally received a new hip.  Which was promptly recalled.

Add in Sam's random shaking which has yet to be concretely diagnosed, the 20+ cases of strep throat, a bad gall bladder and hand food and mouth disease and you start to wonder what's in the water around here.

So while enjoying a beautiful evening with some friends, it wasn't unusual for us to hear tears.  I mean, really, with four kids under the age of five, you pretty much expect it to happen at least twice an hour.  But when Sam started crying, there was definitely something different about it.  It wasn't the "my sister won't share and hurt my fee-ee-eelings" type of cry, but instead a "oh, man, this really hurts" cry.

After bending it, prodding it, calming Sam down, and determining that it was probably OK, we headed to bed.  But when we woke up and Sam was still in pain, we headed to the doctor for some xrays, which showed a hairline fracture.  A temporary cast and sling and she was good to go, at least until we could see the ortho doc on Monday. 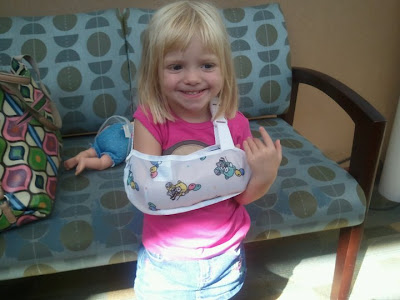 We spent a day on the couch.  Sam was a great patient.  Addison insisted on having a cast as well - can't have the attention on her sister for too long, you know.  Every 4-6 hours Sam would start crying that she hurt and we'd give her some Ibuprofen, feeling so sad for our little girl. 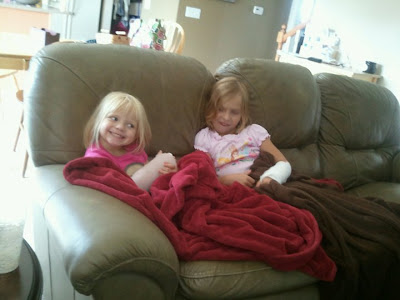 On Monday, Sam woke up in pain.  We slinged up her arm and sent her to school with kisses and meds.  Jay picked her up around lunchtime and took her to the ortho doc.  About 45 minutes later he called to tell me the sad, sad news.

Sam's arm was fine.  The hairline fracture?  Not visible on the same xray the doctor on Sunday reviewed.  The pain she was feeling?  Once they took the cast off she decided she was healed, with not a single mention of it since.  Within hours she was climbing on the couch, running around, her cast and pain a distant memory.

We are of course thrilled that she is fine but totally confused about the mis-diagnosis.  We've heard of the 24-hour flu, but a 24-hour broken bone?  Of all families, of course it happened to ours.

Do you think anyone would think it was strange if we start dressing our kids like this just to walk around? 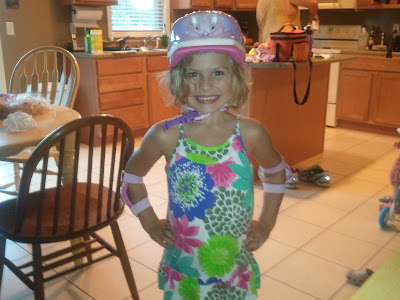