17. Do something selfless for someone else.

Rerun:  After a week of feeling sorry for myself, I watched a show on bone marrow donation and remembered I'm not 100% evil after all.  Go ahead, join me and sign up too.

Number 17 on my list is a tough one. When I think about doing a good deed for someone, I know that at the end of said good deed, I will feel good too. So I get something out of it too. So, how do you do something that’s totally selfless? When most likely you too will be rewarded in the end. Hmm.

When I Google the term “selfless”, here’s what I found: Selfless: –adjective; having little or no concern for oneself, especially with regard to fame, position, money, etc.; unselfish.

I don’t know if I’m cut out for true selfless-ness. But, this last winter I made a decision to do something that I feel could be pretty selfless, even if it’s only by my own definition. I signed up to be a bone marrow donor through Be The Match.

“Why would you do that?” Is the response I received from the few people I told, including Jay. The best way I could explain my thought process was that when I was super sick with the flu, I felt horrible. At one point I was laying there, feeling like I could never feel worse, when a thought went through my mind. Jay’s mom had cancer for a really long time. That means she went through chemo, medicine, pain, aches, etc. that lasted literally for over SIX years. For me, I was ready to throw in the proverbial towel after six hours of being sick. And I knew there was an end in sight for me. But I know for Jay’s mom and other cancer patients, without a cure they don’t have that piece of mind. That’s what got me started.

The process was pretty easy. I was resourceful enough to find a discount code online, so ordering the initial kit was free. The hardest part was trying to decide who to put down as my emergency contacts. So I hit submit and waited for my DNA kit to arrive.

About three weeks later, I got a package in the mail and started to freak out. By then I had heard that donating bone marrow was super painful, a hard recovery, etc. (myths!) and since I pass out at the THOUGHT of a blood draw, I started to back track on my “selfless” act. Then, the girls both came down with Hand, Foot and Mouth disease and within three days couldn’t eat, swallow, or even really move off the couch. They were the picture of misery. Just like when I was sick, I had the good fortune of knowing that they would be better in just a few short days. However, a little kid with cancer isn’t that lucky. That night I used the four cheek swabs (think Jerry Springer and “who’s the daddy!” shows) and mailed my DNA off.

Another three weeks went by and it was official. I even got a card in the mail. I am a registered donor! 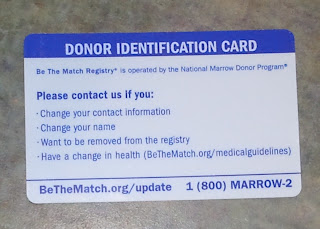 Well, I don’t know if what I’ve done would been deemed selfless by anyone else, but it definitely felt good to know I could potentially help someone else.  I’d strongly encourage you all to do something selfless too.  Click on this link to be as cool as me and be a donor.  You’ll be glad you did!

You...and Michael Wanser...inspired me. I signed up to be a donor at this year's Mini Marathon Expo. If you do St. Jude's again next year...I think I want in.