It is official.  We officially have two (almost) healthy﻿ girls.  So since we are almost back to normal, here's how we rang in the new year.

We knew the kids were kind of sick, so it wasn't a huge shock to take Sam to the doctor on Christmas Eve.  She was diagnosed with basically a sinus infection and strep throat.  And even though she was sick, she was still very happy.  But she continued to get sicker and sicker.

By the time we got home, we had just a few things of medicine for the girls. 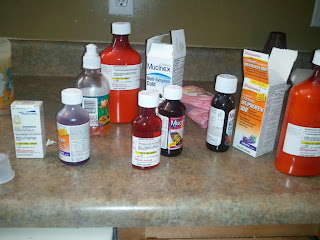 One day later, the sores appeared and Sam was diagnosed with hand, foot and mouth disease.  Two sores on her face went to eight, then the few on her tongue multiplied to around 20. 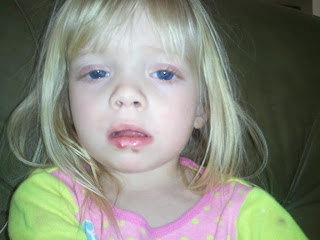 The next day, Addison was diagnosed with the same thing.  And Jay and I stood by helplessly, watching as they got sicker and sicker and in more and more pain.  Within a few days, neither could drink without crying and we were on the lookout for dehydration.  ﻿

It was terrible.  Really, there is no other way to describe it but awful.  We cancelled our New Year's plans and spent several days cuddling, hugging, and doing our best to not throw up when we smelled the girls' breath.  And sanitizing. And pondering how to make 2011 a sick-free year.  And gagging a little more.  That breath.... Whew.

And now, 10 days into the year, we are healthy, the girls have brushed their teeth, and we are excited to see what the year has in store for us.