Last weekend, Jay was on his own for the most part while Jenny, Laura and I hosted our Easter Seals event.  And as I said before, it was a big success.  We raised around $1500 for a great cause and I even had someone do an entire page on me. 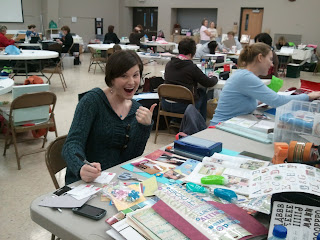 I got home around midnight Saturday, totally exhausted.  And Sunday woke up to a glowing report from Jay.  The kids were great all day, according to Jay, and the dishes and laundry were done.  Awesome.

Then I noticed that the coffee table looked... different.  Kind of spotty.  I asked Jay and he said, "Oh yeah.  I was on the phone and Sam started crying and I realized she was playing with hand sanitizer and got it in her eye.  I cleaned her up and sent her and Addi to play in the basement.  A few hours later I realized there were piles of sanitizer on the coffee table and they ate through the top coat.  Oops."

I tried to use that as a "hey let's get all new furniture!" to no avail.  At least I tried.

About an hour later, Jay then remembered that the girls, while playing "quietly" in the basement, scattered a 10 lb bag of cat food around the basement.  Literally, from one end of it to another. 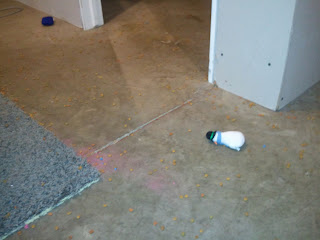 Guess how we spent two hours on Sunday afternoon? 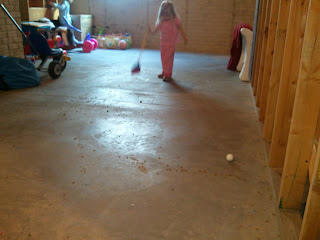 On one hand, I'm glad that's all that happened.  On the other hand, I really hope Jay remembers quiet children are sneaky and often sticky or destroying something.