Today was Sam and Addi's Halloween parade at school.  Addi was thrilled (more on that later) and Sam was totally not into it.  We struggled at home for an hour to get her costume on, gave up, then went to school and made Sam cry there. 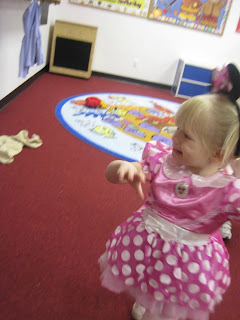 Shocker... She calmed right down as soon as I picked her up.  And double shocker, I had to carry her around pretty much all morning. 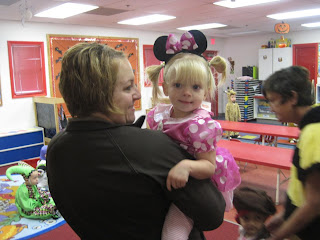 She did calm down enough to take a few pictures with her friends at school. 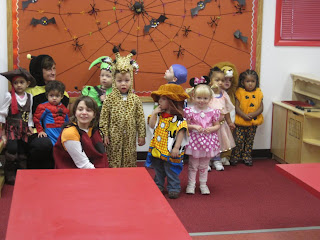 And she was VERY excited to take many pictures with Karter.  He's her "friend" - not sure how deep the bond they have goes but they have been known to switch socks with each other at school on many an occasion.  A boy willing to wear pink socks for a girl?  A keeper in my eyes. 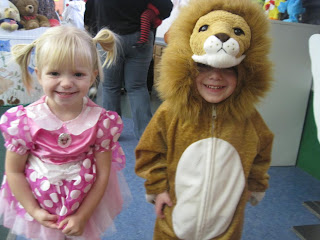 After the parade we headed back into their room for the party.  Or what the parents slyly call "leaving their sugar crazed kids to the professionals."
During the party, a fellow mom made an unusual observation.... Notice anything odd about Sam's table?  Look closely. 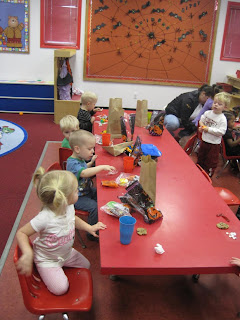 OK - now look at the table right next to it. 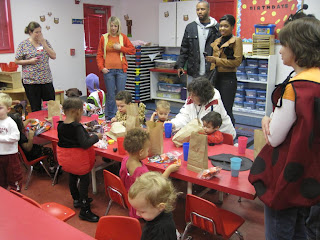 Still stumped?  Well, all the blonds are assigned to one table, while all the dark-headed kids are at another.  I asked the teacher if the kids seem to walk in a uniform fashion or try to speak in a German accent and she laughed, then said no.  She said that Sam's table is the one with the kids who don't hit, bite, or throw food.  Kind of interesting if you ask me.
Hey, don't judge... it never hurts to ask about these things, especially considering my other kid has already started her life in crime as a mob boss.  Sam could be a dictator in the making.  You never know.