Last week we took a mini vacation to southern Indiana. We went to Holiday World (the cleanest amusement park in America with free drinks to boot!), spent time with family, and Jay and I even snuck away for a night to spend our anniversary child free. All in all, it was a pretty rockin’ way to spend 5 days.
Addi not only got to swim, play with her cousins and ride a roller coaster, but she got to fall in love as well. A few hours into our day at the park, Addi started staring at her cousin, Bryce. Then, she started walking close to him. Minutes later they were holding hands and she confessed that “Bryce makes me feel shy.” When I asked her what kind of ice cream she wanted and she responded with, “I want whatever Bryce is getting,” I knew her first crush was in full swing. 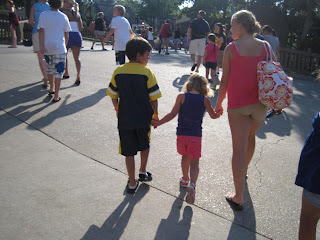 Bryce, "shy" Addi, and Megan
After the park we headed to Denny’s where the kids devoured plate after plate of food and were surprisingly well behaved, all things considered. When they started to get restless I pulled up some videos of Addi dancing on my cell phone and let the distraction begin. When it was Bryce’s turn to hold the phone, Addi looked shyly at him, and every time he laughed at her antics, she blushed. She told me on the way home that she planned on marrying Bryce someday and I just smiled. She’s only four, so really I don’t think I need to be concerned yet. But if she starts talking about moving to Kentucky, I might get worried.

Awww! How sweet. The first of many crushes :)