Addi loves my dad. He’s her “Pop-Pop” and at least once a day there’s a conversation revolving around him, or his horses, or his dog, or his room (our guest room). Don’t get me wrong, she loves her other grandparents too and talks about them quite a bit. But there’s something special about her Grandpa.
Sunday morning, Addi stumbled out of my bed. Then she said, “Today, I’m Pop-Pop!” OK, no cause for concern or even a response… on any given day she’s a dog, or a baby, or a boy, or a rabbit. Then she asked, “Does Pop-Pop wear sweaters?” Seconds later she had on a sweatshirt and downstairs we went.

I started to make breakfast and a scratchy, moderately deep voice said, “Pop-Pop drinks coffee. I want coffee.” So, I filled a coffee cup up with juice and Addi happily took it from me. When she headed out the back door I asked where she was going. “Pop-Pop drinks his coffee outside.” She’s right – he does.

I was looking around for my camera to take a picture when Addi came back inside. I assumed she was tired of being Pop-Pop. Nope. She was looking for her cigarettes. Because Pop-Pop smokes with his coffee.

The kid leaves me speechless daily. 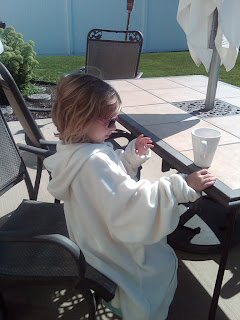