Being a two-parent working family isn’t easy.  There’s always something that didn’t get done, someone who didn’t get to do what the really wanted, and both Jay and I now rely heavily on coffee to get us going in the morning. That said, it’s how we have chosen to live and I’m definitely not complaining. I really would love to stay home… but I don’t want to be a stay at home mom. The kids can still go to daycare – I just don’t want to work.
When I figure out how to do THAT, I’ll let you know.

One of the ways we have managed our tight schedule is by dividing up regular tasks. Jay does the cooking and grocery shopping, and I take care of baths, clothes, house and kids. And we manage our work schedules as best we can – sometimes my work has to be the priority, sometimes his does. It’s messy, but we get the job done.

Lately, Jay has been working really long hours, including weekends. So I’ve had to step WAY out of my comfort zone into a land I never thought I’d set foot in…. cooking. The first few nights were admittedly pretty rough, but a trip to the grocery store and making a list of meals took a lot of the pressure off. I know HOW to cook… It’s just hard to come home with two screaming kids and wing a meal. Some planning up front has definitely helped. My meals are not gourmet in any way, shape, or form, but they also aren’t PB & J or hotdogs.

Sunday, I was feeling extremely domesticated after scrubbing my kitchen top to bottom (thanks to some friendly ants that appeared under the oven) so I decided to make a batch of these muffins I love. And yes, it’s actually baking with raw ingredients, not adding water to powder. Just ask my poor fingers that met their demise with the veggie shredder.

My muffins are a work in progress. I’ve been experimenting with them, trying to come up with ways to make them healthier but still taste oh-so-good. I keep all the ingredients at home so when I saw a break in kid policing, I started mixing away. I even used Splenda instead of sugar this time, as well as applesause instead of oil and Eggbeaters instead of eggs. Everything was going just fine until I went to add in this ingredient. 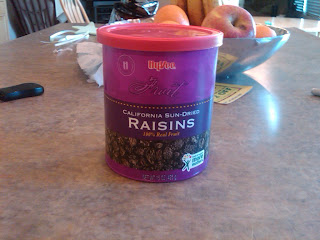 Looks normal, right? But when I opened it up, instead of raisins, I found this: 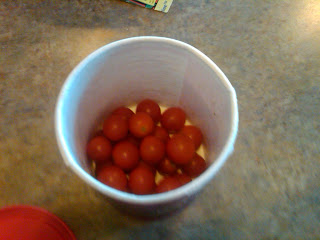 Addi laughed hysterically when I pointed it out to her, then couldn’t remember where she put the raisins. A quick search of the playroom gave me no clues and I slumped back to the kitchen, defeated.
Then, my inner domestic goddess took over and I had a brilliant idea. I have lots of healthy trail mix at home, with nuts, raisins, cranberries and cherries. I could use that! I picked out the nuts and the muffins marched on. Thirty minutes later, I had a new addition to my recipe. Cranberries just made them better. 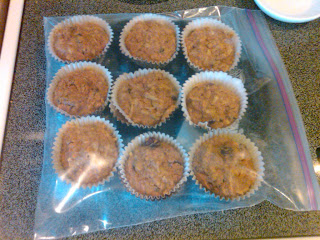 I have to admit, I feel kind of bad ass now. I baked, improvised with ingredients, cleaned house, AND my kids didn’t break anything, all in one day. I think I need a tiara now.