I have a confession to make.
I have been under the mistaken assumption for the past few years that I am raising two normal children. Turns out, not all kids are like Addison. Most are actually a lot more like Samantha. This does explain how people have 6+ kids and don’t head straight from labor and delivery to the looney bin after each one.

Last weekend we were at the pool and Addi was swimming around. She was a dolphin, Jay was her owner, and she was doing tricks for fish. For a brief moment her ADD kicked in and she turned into a shark, then faster than I could say “Ritalin” she warped back into Flipper. I struck up a conversation with the lady next to me who also has two little girls and said, “Oh you know how it is when your kids pretend to be animals, right?”

After coming home from the pool and from ice cream, Addi and Sam adopted two of Jay’s fishing lures as their pets. Within minutes “Vanilla” and “Vanilla Twist” were valued members of our family, ones the kids couldn’t live without. Addi even made a small bed for Vanilla and talked all night long about the adventures they were sure to have. When it actually came time for bed, however [dramatic music here] Vanilla was GONE. Vanilla Twist was given as a substitute but was quickly discarded as a cheap knock off. He was missing a leg, after all. As the wailing and gnashing of teeth got louder and I ran faster and faster around the house trying to find Vanilla, Jay finally wised up and headed to the garage. Moments later, like a hero bursting through a wall of fire, here came daddy to the rescue. After inspecting the Vanilla to ensure all legs were, in fact, in tact, Addi quickly went to sleep. And Jay breathed a sigh of relief because although new Vanilla had all his legs, he also had a giant hole through the head where moments before a hook was. Luckily a hole Addi did not see. 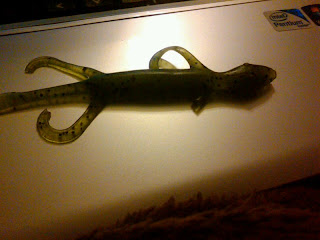 This morning, with Vanilla just a distant plastic memory, I found Addi laying in bed with both legs stretched towards the ceiling. Why? Because she was a possum.
Who knew this wasn’t the norm?