For the love of the game

Growing up it seemed like I was always involved in sports. Except for my very short stint with soccer, I enjoyed most sports and was pretty decent at them until I realized I could get hurt. Then gametime just stressed me out. Jay played football and swam competitively too, so when talking about our kids it’s never been a question of IF they will be active in sports, but WHEN and WHICH ONES.

As a reward a few months back for some mistaken good dead or another, Jay got the girls a golf set. Addi was excited to become a golfer like daddy and I was thrilled for her to be interested in a non-contact sport. Less chance of her getting hurt, hopefully less cost for supplies… After they played with the set once and then forgot all about it, I found the set stored nicely in the Tupperware cabinet– aka Addi’s “cubby”

I asked her to please put the set where it belonged. Five minutes later I had a game taking place in the kitchen. Addi what exactly she was doing because the last time I checked, golfers don’t wear oven mitts on their feet. 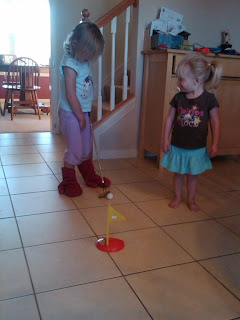 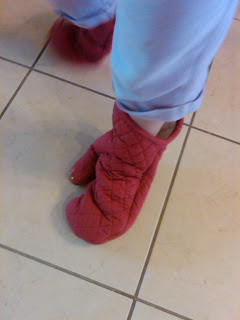 She agreed. Golfers don’t. But hockey players DO. There goes my dream of her having a full set of teeth.