A few months back Jenny and I decided to sign up for Building Steam, a training program for the Steamboat Classic 4-Mile race. I signed Jay up for the race itself as well since he likes to run, thinking it would be fun to do it together. When I told Jay he was officially signed up he said, “Great! I’ll totally beat you without even trying.”

After two months of Jenny, Erin and I diligently working at our 12 minute mile pace and Jay never even once putting on his running shoes, he made the smart choice and decided to sell his entry. A golf outing made much more sense.

Well, our training paid off… Erin, Robert, Jenny and I ran our first 4-mile race yesterday! Erin and Jenny totally rocked it, never even stopping once during the entire race. I walked twice but caught back up and we all finished in under 48 minutes, beating our 12 minute pace. Robert of course beat us all but I totally blame his long legs. 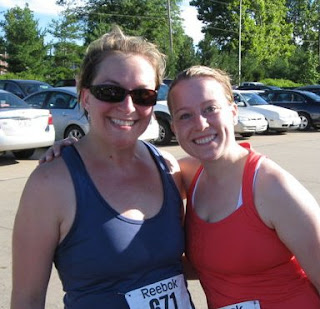 After patting ourselves on the backs – we were all very proud of ourselves, which I think is very understandable – and some snacks, we headed home. Jay and the kids were super excited to see me and after a congratulatory hug, Jay begged me to go take a shower.

After a much needed nap I got online to check my official time. It’s a pretty simple search engine – you type in your last name and your official race time pops right up.  I typed in Ralph and look what I saw...

Turns out, Jay was right.  He didn't have to do ANYTHING and still beat me in the race.  Because he sold his entry at the last minute we couldn't change the name on the bib, so from now until eternity, Jay has the bragging rights (and documentation) to prove he ran faster than me.  AWESOME.

So proud of you Steph! Great job!!!