Faster than a speeding bullet…

As a kid, I wasn’t much into super heroes. I have heard stories of little boys jumping off their roof and breaking limbs, all in the name of saving mankind from an evil villain. The super hero is a big deal to the under 8 set, or so I've heard.
Me, I would have rather played with Barbie – and her only super power was making little girls feel inadequate and giving them a poor self-image. Dang those super thin legs and beautiful, round boobs eyes. Giving unrealistic expectations to boys and girls everywhere.

My kids are much luckier than I was. They don’t have to daydream of scaling a wall or flying from building to building, because they already have a superpower and it’s AMAZING.

World – I unveil to you… the SUPER WHINE.

That’s right, the Super Whine is amazing, powerful, and incredibly effective tool of mass destruction. The cover is two cute, sweet girls. But one layer down is a power like you’ve never seen before. With all of the sickness at our house this year, these two have honed in on their skills and figured out how to manipulate their mom and dad to get their own way. And we are paralyzed by this power daily.

On Monday night, Sam woke up crying, sweaty and snotty and very, very hot. After some juice, rocking, books and a trip to mom and dad’s bed, Sam Whined her way into heading downstairs to watch some cartoons, then Super Whined herself into some pudding and a popsicle. Then, she put her Super Whine into turbo when she had to get blood drawn at the doctor.

When Addi came home from school yesterday with two skinned knees, she Super Whined her way into some ice cream, gave Jay a hug, then winked at me over his shoulder, proving she knew exactly what she was doing. Brat.

To Jay and I’s defense, we DO tell them no. A lot. And before you get too judgmental, answer this question.

Could YOU say no to this face? 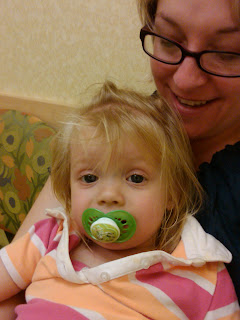