Addi has a big love for Spongebob.  I am not so much a fan and try to get her to watch more wholesome shows but somehow she became obsessed.  I keep hoping it's a faze but so far, no luck.  We have just tried to limit her watching it and cross our fingers her obsession with Hannah Montana comes back soon.  Addi already shows kids at daycare her undies so I'm guessing a teenage popstar can't be that bad of an influence.  The damage is done.
Last week we were driving home and talking about the kids days.  Out of nowhere Addi said, "Mommy, the people in my head tell me they hate me."
I almost rear-ended someone and started freaking out... Images of my little blondie in a straight jacket danced in my head and I somehow managed to ask, "Addi, what are you talking about?"
She said, "Well, on Spongebob he had people in his head and they were doing silly things.  So I do too.  Then Spongebob had ice cream.  Can we have ice cream tonight?"
After breathing one of the hugest sighs of relief EVER, I vowed to ban Spongebob from our house.   However, this ban did not go over well and the tears were flowing.
The next day, Addi found my shower sponge and realized it was her beloved Spongebob. 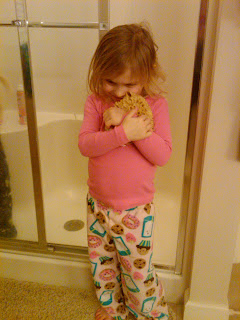 It's obviously true love. What's a mom to do.