Today we celebrated my mom's birthday with something priceless... Addi's tonsilectomy.  After five rounds of strep throat since November, it was pretty much a unanimous decision that the tonsils must go.  And really, the sooner the better, thank you very much!
We headed to the day surgery center today where Addi chatted up all the nurses and carried her unicorn Emma around with her.  Then we got all dressed up in this awesome gown and waited for go time. 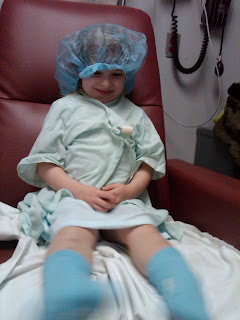 Soon after slipping on the non-slip socks, Addi started to freak out.  A warm blanket, some cuddles from mom and a round of anti-anxiety meds were prescribed. 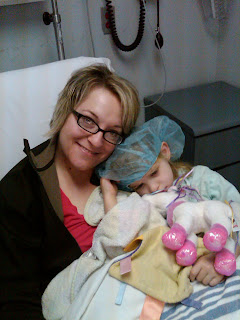 We tried to distract her by taking some silly pictures... 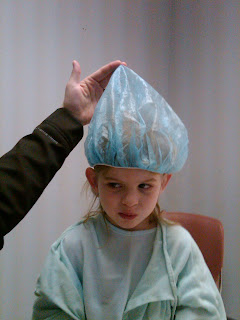 ...but who are we kidding?  I highly doubt it was my magic powers and made her smile. 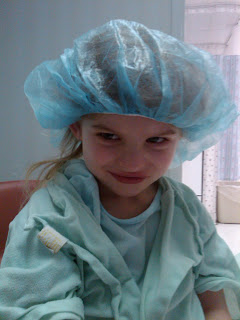 I'm willing to bet it was the drugs.  She was stoned, that's for sure. 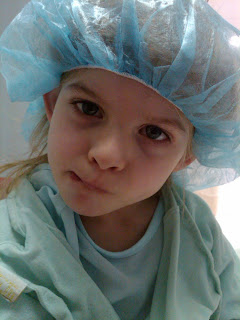 With a hug and a wave she left for surgery and Jay and I headed to the recovery center.  About an hour later her surgeon came in and said that she entertained them with stories about butterflies until she was knocked out, then she did great during her surgery.  Once in there, the doc decided to also remove her adnoids.
Once she got to her room, she cried for a few minutes, made me climb in bed with her, and then fell asleep.  She woke up, puked, then asked for a popsicle.  Which she promptly threw up too. 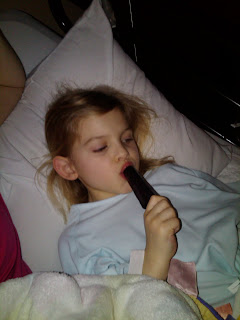 Finally after some ice chips and juice also came back up, the nurse ordered some anti-nausea meds and Addi was well on her way to feeling better.  Within the hour she downed some pudding and it thankfully stayed where it belonged.  She also gave me a 4 minute break so I could eat, then promptly threw her Daddy out of her bed and asked for me to climb back in. 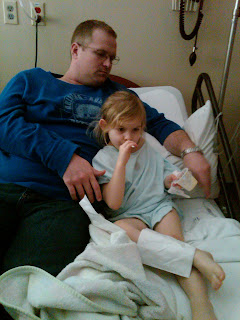 Once we determined that Addi was on her way to recovery, we had the nurse check out Emma.  Sadly she also had her tonsils removed but was a much better patient than Addi.  Emma also got an IV which made Addi feel not so alone. 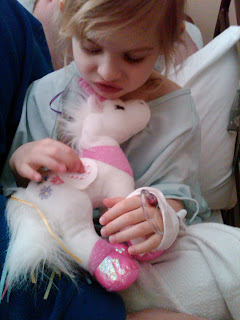 Lucky for Addi her favorite food is part of the recovery process, so she ate some mac and cheese, then took a nap.  She woke up, got the IV removed and we headed home! 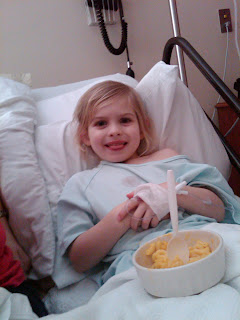 Since we've been home she's had another nap, cried, ate 5 packages of jello and pudding, refused applesauce, and watched several cartoons.  Her throat hurts pretty badly and we have to pretty diligently give her Tylenol every 4 hours over the next week to get her through this, as well as keep her quiet and calm.  LOL... Not sure how that's going to happen but miracles do happen I guess!
Our goal for this week is to stay hydrated, get some rest, and have mommy not go completely insane on Spongebob episodes.

What a trooper! So glad everything went well!

You know who Addi looks like?? She looks like that adorable little girl from My Girl. I don't remember her name but she looks a lot like her. I'm glad to hear she is doing well and hopefully this will mean less antibiotics in your future. Our house is streaming with it too. Although, at our house it doesn't discriminate, we just pass it back and forth to one another. Norm seems to have an immunity to it because he rarely gets it. Whatever! lol