It's a dangerous job

Addi and Sam love to play daycare.  It's pretty much a given that at any one point in time, you can find several "honeys" napping, being patted to sleep, or sadly, in time out around the house.  Sam reads books to babies... Addi reads books to Sam...  It's just a ball of fun every day around here.
With both girls sick this past weekend, we spent a lot of time inside.  Which meant Jay and I spent a lot of time tripping over babies, blankets being used as cots, rugs moved around, and various projects the "kids" were working on.  As any good daycare would, I made sure to take lots of pictures so the parents would be able to see what their kids did during the day.
Putting out "cots" for naptime: 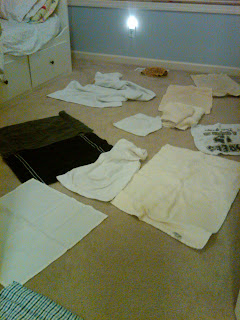 Making sure Sam takes a nap too (and notice the babies laying EVERYWHERE): 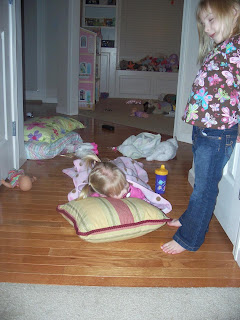 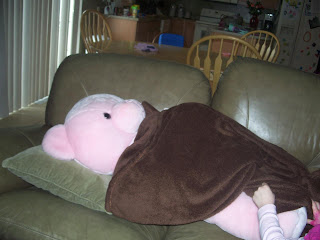 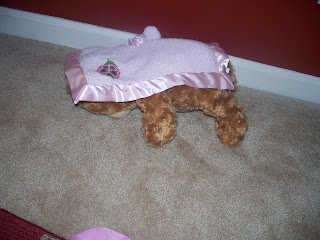 At one point we nearly had WWIII because Sam had the audacity to start coloring on a paper Addi had carefully laid out for journal time.  And it wasn't like she didn't have 16 other papers laying around and couldn't share.
Does this baby look like she cares if Sam takes over her art project?  I think not. 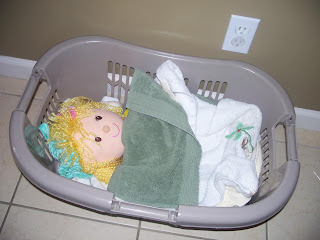 Jay came home from ice fishing and needed to go potty. Three seconds later I heard a CRASH, a few choice words, and some groaning. Apparently Jay was not informed that the downstairs bathroom was the "baby room" and that it was naptime. 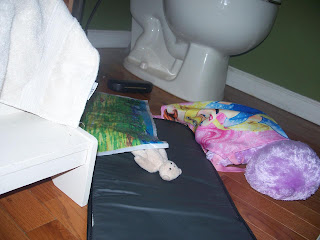 So Jay, assuming the bathroom was being used for, um, a BATHROOM, walked in, tripped over three babies, and this poor stool took the brunt of his weight. 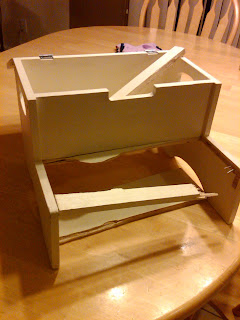 Who knew running a daycare would be so dangerous?

we have that same baby doll that is in the laundry basket... Tate lovingly and creatively named her "Big Girl"... haha! Your girls are hilarious... I so wish you lived closer, they would have a blast, and so would we! :(