It's been four years of trying to get this kid to sleep.  We pretty much let her decide what to sleep with out of pure desperation to get her to sleep at all and secondly, sleep in her own room.  In those four years, she's picked some random things to sleep with at night... popcorn, nail polish, her dad's shoe...
As she's grown, she's started to picked a few more normal things.  Each night she sleeps with "shape blankie" (a blanket with squares on it) and either Coco the bear, Sheep the sheep, or Crystal the kitten.
But just because she's gotten the hang of picking normal "night-nights" doesn't mean she's given up the strange ones.
Here is a picture of last week's most treasured possession. 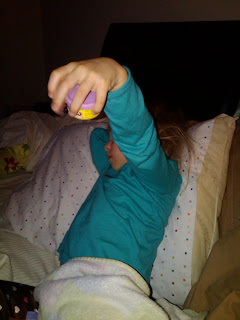 Yes.  That's a tube of PlayDoh.  Pink PlayDoh.  Really REALLY fun to find under your arm at 3 a.m.  Oh and that's shape blankie covering her up.
And, last night: 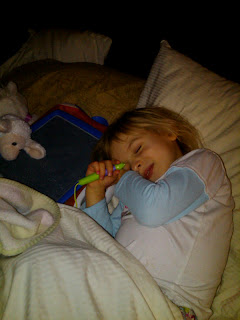 A Magnadoodle.  I guess in case the urge to practice upper-case F's strikes her.  As long as she's not telling someone to F off, I'm cool with it.

And, yes, for those of you who've been to my house before, that's MY bed she's sleeping in both nights, not her own.  I don't want to talk about it.