As everyone knows, Addison has a paci addiction. Not only must she have one pretty much 24/7, she is OCD about it. At night she lines up 4, 5, or 10 pacis in her hands, in a certain order, and calls them her "boomers". And if one paci is in the wrong place or (God forbid) missing, she flips out. We've been planning a visit from the Paci Fairy for some time and our last few attempts have been wrecked at the last minute. And really at this point if I thought it would work I'd buy her a Lexus. The orthodontics bills are looming in the future and it's SO time to say goodbye. So we all decided, this Friday was THE day.

Addi had other plans. Last night about 6 p.m. she said, "Mommy, the Paci Fairy is coming tonight!"

We thought we had a few more days to prepare but hey, you have to seize the moment. So we went on a paci hunt, found eight of them, and tied them to strings. Since Sam was already in bed with a fat lip (received after falling face first off a kitchen chair) we let her keep the paci that was in her mouth plus one additional one "for school." 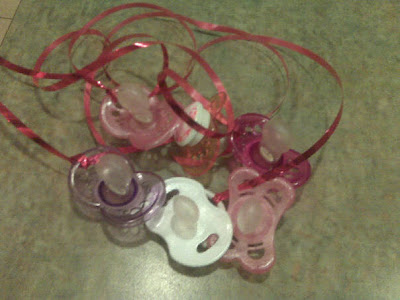 Then we went to the backyard and hung them from the tree. Addi made sure to get her very last few seconds in with her favorite paci. And no, she's not wearing pants. 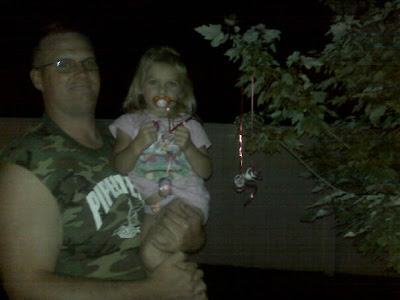 After we came inside, Jay headed to Walmart (for "something" Mommy needed, aka Paci Fairy presents) and I tried to put Addi to bed. Then she realized she didn't have a paci and freaked out. But, the enticement of a surprise was enough to keep her from going totally berserk. Instead, she asked if she could "Just hold" Sam's school paci for awhile. No way. Finally at 10:30 she drifted off to sleep in our bed and we all had a few solid hours of rest.
At 6:30 this morning she woke up and yelled, "Did the Paci Fairy come??!!?", then ran to the window to see. "No paci's on the tree Mommy, she came here!" and we ran downstairs.
As she saw the gift that was left for her, she started yelling, "Oh my gosh Mommy look! LOOK!!! The Paci Fairy left me a WATER BOTTLE! Wow!!"

Yes, there was a water bottle. See it below... attached to the BRAND NEW BIKE the Paci Fairy also brought her. [geesh] 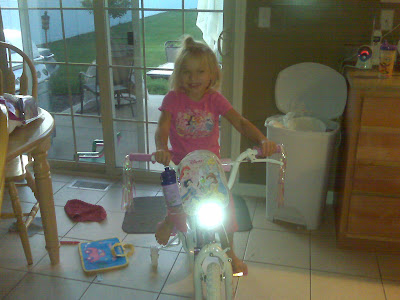 She eventually saw the bike too and we dragged it inside so she could ride around the kitchen.
On the way to school she asked, "Mommy, how did the Paci Fairy get my bike here? Isn't she really small like Tinkerbell?" Before I could answer her she answered her own question. "Oh Mommy, she MUST have rode the bike here."
Of course she did.
Tonight will be the true test I'm sure. But we've made some pretty significant progress. And had I known the Paci Fairy brought such sweet gifts I might have kept mine a little longer. Like say till college.