I have been avoiding blogging about this for fear of jinxing it, but about two weeks ago we had a visit one Friday night from the "Potty Fairy." For those of you who only know about the tooth fairy, the potty fairy comes and takes Pull Ups away from little kids who have relied on them for waaaaaaaaaaaaaaaaaaaaaaaaaaaay too long. And it their place she leaves a sticker chart and stickers and a promise to bring a surprise when said chart is filled up. Pretty snazzy deal if you ask me.

We were pretty concerned that Addi was relying totally on the Pull Ups and this was what was causing the delay, so once the potty fairy came we told her she had to wear only real underwear from that point on. The first day was rough but after that she actually did surprisingly well. With the pee, that is.

For the pooping in the potty we had to create even more incentive than just the stickers. For many kids, this is the trickiest part of potty training, so we told Addi once she poo'd on the potty she could pick out anything she wanted as a prize.

Meet our new hermit crabs. The purple one is Austin and the orange one is Tyrone - (named after the Backyardigans.) 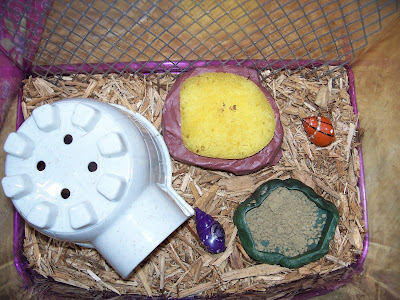 In what I consider to be a pretty quick turnaround, Addi filled her sticker chart right up and only had one accident all week. She was pretty excited to put the remaining sticker on. 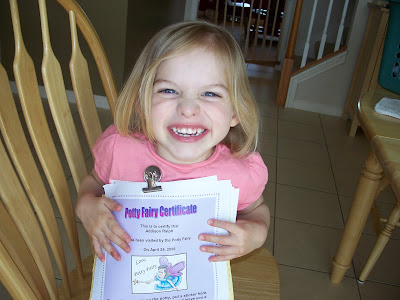 As promised, the Potty Fairy came back to drop off her surprise. Candy and a Barbie... Again, this kid is making out with the gifts like a champ here! 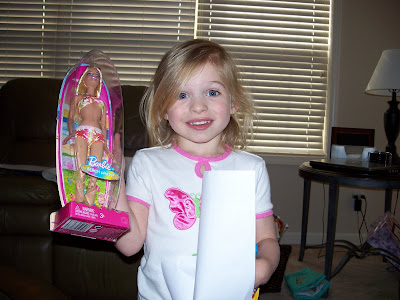 So, after MONTHS of struggling, Addi became potty trained relatively quickly and painlessly. I guess once she was ready, she would do it. And truth be told, had she said that in exchange for her doing her business in the potty she would like a mint condition 64 Mustang, I'm pretty sure we'd be at a car auction right now.
Don't blame us. Two kids in diapers ain't cheap!

Yay, Addi!!!!!!!! What a big girl!!! Teach me how to get the pull-ups off for bed time and we are golden :) Is she bed-time trained, too? How do we do that?!?! Tate's fine during the day, just not bed. Any test runs with that yet??? Hope you are feeling well! Been thinking of you and your lovely surgery... geez louise, what a pain!

YAY Addie! I'll have to remember the potty fairy once Emma is ready to be trained. Thankfully peer pressure worked for Madison. We'll see how Emma goes in a year.