Trip to the hospital

I'm sure when I tell you all that I spent the afternoon in the hospital with my daughter, your first thought probably is that Addi finally managed to hurt herself enough to need medical attention. Or get mascara in her eye. Or get frostbite on her tush from not wearing pants outside.

Because really... That girl is a dare devil.

Take the picture below for example: 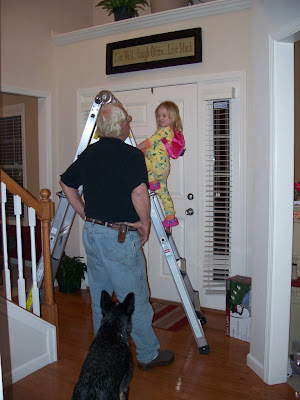 Jay was putting up Christmas lights and left the ladder out. We heard a noise and found Addi at the top, wearing a backpack, heading off to school. Donning her Dora Crocs and her PJs like the stylista she is. Not a care in the world.

But I'm sad to say, I was with Sam today at OSF. Check out her baby bling, courtesy of admitting. 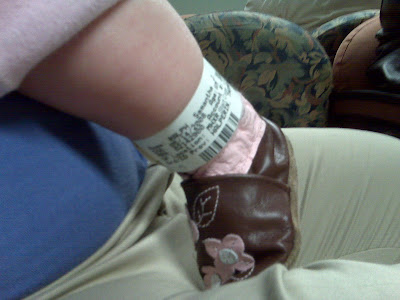 Don't worry, everything is fine. But after spending four days coughing so hard she makes herself puke, running a fever, and just being overall miserable, I took her to the doctor today. Besides an upper respiratory infection and an ear infection, they were concerned she had the flu, RSV, or pneumonia. So off to the hospital we went to get a chest x ray and some labs.

Four hours later we returned home with good news - no flu, no RSV. The film should be back in the morning and we'll find out for sure if she has pneumonia. I'm assuming no.

After the hospital, Jay took off to the pharmacy to pick up her antibiotics and some extra medical "stuff." Turns out we put too much money in flex spending this year, so we're thinking cases of Tylenol for Christmas gifts. He came home, then I got to go BACK to the pharmacy to fix her script. Turns out the fine folks at CVS sent us home with powder and forgot to mix up her antibiotic.

As of right now, 10:04 p.m., Sam and Addi are both asleep. Let's cross our fingers this doesn't end up like the plague.

We have the same problem with our flexible spending. Darn those kids for not getting sick more often. I think your idea of medicines for Christmas just might work. I could make gift baskets for everyone with Advil, NyQuil, Pepto Bismol & Band-aids.