This weekend we took the girls to Purdue to trick or treat and go to their first tailgate and game. For the first time, Addi was very into Halloween... She was into picking out her costume, into picking out Sam's, and very into the candy.

A few weeks ago we asked Addi what she wanted her and Sam to be and she said "Bees". She is very into The Bee Movie so that was no surprise to us. Then one day after talking like a pirate for a few hours she changed her mind. She said "ARRRRRH Matey!" and "Walk the plank!" so Jay picked up a pirate costume that night at the store. He brought it home and Addi said, "Yeah! I'll be a pirate!" and we called Grandpa and he asked what she was going to be and she joyfully exclaimed, "A robot!" Kids.

After getting her back on the pirate ship we went in search of a costume for Sam. A parrot, we decided, would be the perfect complement for this pirate. 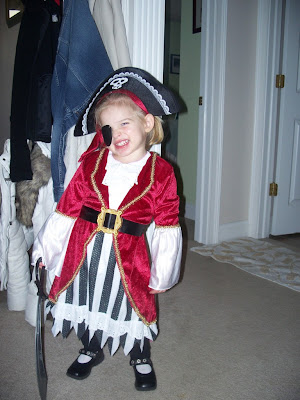 But, apparently parrots were popular this year. We couldn't find the right size. So, while I shopped for new shoes Jay went in search of a costume and came back with this: 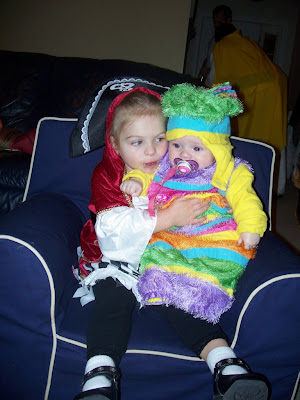 MAYBE it's really an inchworm costume. To Addi, it was a parrot. She was happy and Sam was warm. Wins all around.
Addi LOVED trick or treating too. We met our friends Andy, Nikki, Matt, Loren, Mitch, and Mindy and their kids and headed out as a big group. Addi kept running ahead yelling, "Come on guys! Let's go!" and got so excited to say "Trick or treat!" Maybe it was the massive amount of sugar she had.. Either way, she had a ball.
After spending hours trying to get her to sleep in her sleeping bag I gave up and let her sleep with me. Then Sam woke up and the three of us cuddled. Jay slept on the couch. :)
The next day we woke up and headed to the girls first tailgate! I have lots more pictures to post but I just don't have the energy tonight.
Us meeting Purdue Pete - Sam was trying to eat my face. 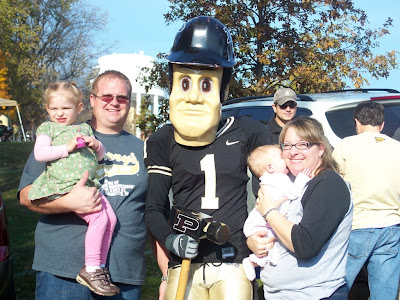 Then Jay headed to the game and I found an upside to Purdue sucking so bad.... Free tickets! I put Sam in her sling and us girls headed to the game too. On the way there, I tried to explain to Addi that this was my school and was where I met Daddy. She got all excited and asked if she would go to school there too and I had to tell her the cold, hard truth... Daddy and I are NOT wanting to pay out of state tuition. She needs to start liking orange and become an Illinois fan. Either that or get a scholarship. She took the news pretty well and we met Jay at our seats. 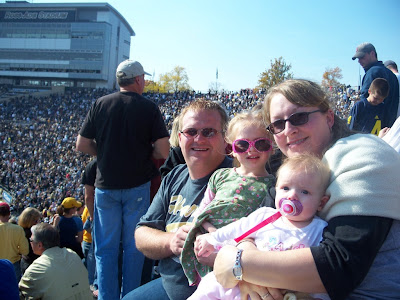 After about two quarters it was time to go... Sam was roasting hot and Addi was whining that she wanted to go back to the car. Since it was naptime I happily obliged and we headed back for the chili cook off. Jay's sister Jill and her daughters Rachel, Megan, and Allie all met us there and the cousins got to hang out for a few. 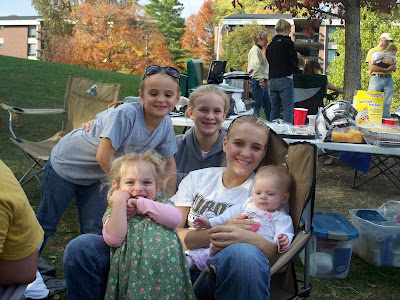 We got home early this afternoon and spent the day relaxing! All in all, a great weekend!

Oh and for those wondering about my diet........ I have two words for you: Halloween Candy. The diet officially starts tomorrow.
at 9:29 PM

Well...I guess you'll just have to have Addi come live with Aunt Mandee for a year to establish residency so she can go to PU...

I love their costumes! How cute!

My goodness....those costumes are a riot! Sam's is absolutely precious!

That is some serious Halloween fun! I love it. Those costumes are awesome.