My kid is strange. I'll be the first to admit it... Or maybe she is just two years old. Either way, I find myself asking her, "What are you doing?" on multiple occasions each and every day. And if I DON'T find myself asking her that, then I am usually cleaning up a mess because whatever she was secretly doing just stained my carpet.

Today was no different. I was doing dishes and turned around to see this: 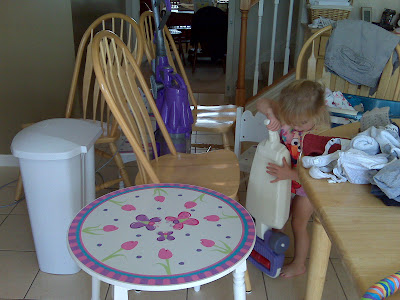 I had to ask what she was doing because I had no idea. When I started dishes, the little white table and chairs were on the other side of the room, and the four chairs were around the table. I heard chairs moving but no screaming or splashing, so I ignored her. When I finally saw what she was doing she told me she was making "her bed". OooooooK.

And yes, she doesn't have on any pants, just princess panties. If you are shocked raise your hand. Yeah, I didn't think anyone would raise one.

Later in the afternoon, I was folding laundry and Addi came running in from the backyard and stole three of my towels. Then she and I fought over a fourth one and I lost the battle. I figured she had spilled something but no... She was doing this: 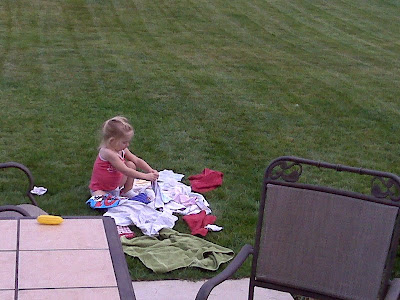 I still can't figure this one out. And yes, she is wearing a different outfit, still no pants. I can only do so much people!

At least she is creative and can find ways to occupy her time without needing our constant help. And at least it's still warm out - I'm hoping the hold weather stops the pantsless wonder I call my daughter.