The bugs are officially out

It’s officially fall so there are bugs everywhere. And when you are two year’s old like my adorable daughter is, a bug is quite possibly the most terrifying thing around. Apparently, even though she is about 1,000 times bigger than any bug she's ever seen, they are scary and should immediately die a quick death.

Addi also has issues identifying different types of bugs. If it flies, it’s a “bee”. If it crawls, it’s a “spider”. No amount of persuading her otherwise will work – the bees and spiders must go NOW, if not sooner.

A few weeks ago, I begged Jay to let me cut the grass and he finally agreed. This might seem like a weird thing to fight about but think about it for a minute – you get an hour, uninterrupted, listening to our not-pod (my name for my generic iPod). No kids yelling, no dishes or cleaning, just walking and trying to go in straight lines. Like our own personal heaven I tell you.

But I digress. Anyway, I had just finished cutting the backyard - Jay was pulling weeds and the kids were hanging out on the patio. Addi immediately ran up to me to tell me about this GIANT SPIDER that needed to move. It was SO big in fact that she couldn’t even get into the house because it was blocking the step. Jay confirmed said bug and said that it had been there for a while but he hadn’t had time to go take care of it. Plus, it was SO big that I think even he was a bit afraid of it. Being the good mom I am, I stopped what I was doing to go take care of this problem and help Addi make her way into the house. After all, bugs can be scary, especially really big green ones.

And wow. The bug was HUGE! And bright green. But it didn’t look quite like any bug I’ve ever seen before. In fact, it looked remarkably similar to THIS: 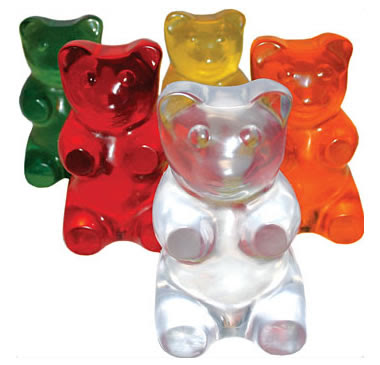 That’s right. It was a gummy bear. TERRIFYING.

Maybe I’m not the only one who needs to pay a big more attention to details.
at 6:11 AM