She gets by with a little help from her "friends"

I've heard there are kids out there who have a "lovey" or a "blanky" or some other sort of special toy they sleep with each night. One that trumps all others, can calm them down in the blink of an eye, and is the life-long (albeit, smelly) companion. Jay and I have always said how grateful we are that Addi doesn't have a favorite, because I could see us at midnight trying to locate said lovey in a blind panic, yelling at each other in the front yard and being "that" neighbor. Hey, we don't do well under pressure.

However, I'm starting to think ONE favorite wouldn't be such a bad thing after all. Addi has always been a bit, say, eccentric when it comes to bedtime. I should have known the minute she insisted on sleeping with a bottle of nail polish that this isn't your ordinary situation. When she had a major meltdown over the Orville Redenbacher, I started to smell the button-flavored future.

Anyway, the last few nights Addi has had issues sleeping. She keeps waking up all freaked out and insists on coming to our room. THEN Jay and I spend the next 15 or so minutes getting all the appropriate "friends" she needs to get to sleep situated. One night, it's Coco. Next time, it's kitty. Then, it's something else random. So tonight, out of sheer hope that it might work, Addi and I set out to clean her bed up, wittle down the number of friends, and cross our fingers for a solid 10 hours of sleep for all involved parties. 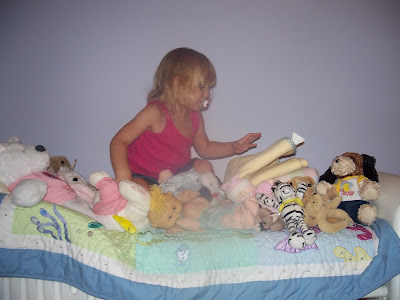 And what we found was very interesting. Here's the rundown. And please keep in mind that she is in a toddler bed, not a full-size RV:

Now, I really was surprised to see a lot of these items, because Addi hides them under the blankets. The sheer quanity alone was astonishing enough without contemplating HOW she even slept in such a mess. She and I then had to negotiate, item by item, and were able to weed out a good 1/2 of what was there. I had some wins... I had some losses.

So tonight Addi went to bed with 3 pillows, some blankies, some animals, and a hairdryer. At least if she wets the bed she's prepared.